ST. PAUL, Minn. — Jason Zucker scored in a shootout to lift the Minnesota Wild to a 3-2 win over the Los Angeles Kings on Tuesday night.

It was Zucker’s first career shootout goal in five tries. Zucker was the only shooter from either team to convert. 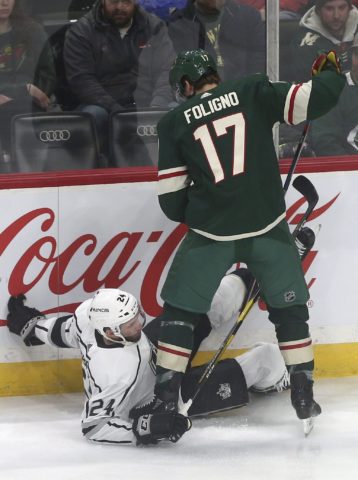 Nino Niederreiter and Eric Staal scored for the Wild, who had lost their previous two games.

Ilya Kovalchuck and Jeff Carter scored for the Kings, who came into the game tied with Ottawa for the fewest points in the league.

Carter scored with 2 minutes, 30 seconds remaining in the third period to tie the game for the Kings, who fell behind twice only to tie the score.

Staal’s goal 7:13 into the third period gave the Wild a 2-1 lead until Carter tied it about 10 minutes later.

Niederreiter, who was dropped to the fourth line in the first period, scored off a wrist shot at 10:16 of the second period to give Minnesota a 1-0 lead. Niederreiter scored for the second time in three games after a 12-game goal drought.

Kovalchuk tied it on a rebound 16:03 into the second. Kovalchuck had gone 10 games without scoring.

Minnesota’s Ryan Suter threw a shot on goal at 7:13 in the third. It was deflected into an open net by Staal. It was the veteran centre’s first goal in 10 games.

Carter tied it off another rebound. Tyler Toffoli’s shot deflected off Adrian Kempe and fell to Carter, who put it away for his 10th goal of the season.

Playing for the second consecutive night, Minnesota started backup Alex Stalock in goal in place of All-Star starter Devon Dubnyk, who was pulled during Monday’s 7-4 loss at Philadelphia. Stalock made 31 saves Tuesday and stopped all three shootout tries.

NOTES: The Kings had to kill off a 4-on-3 penalty during the overtime period. … Dubnyk had started 16 of the last 17 games Minnesota.

Kings: At Dallas Stars on Thursday.