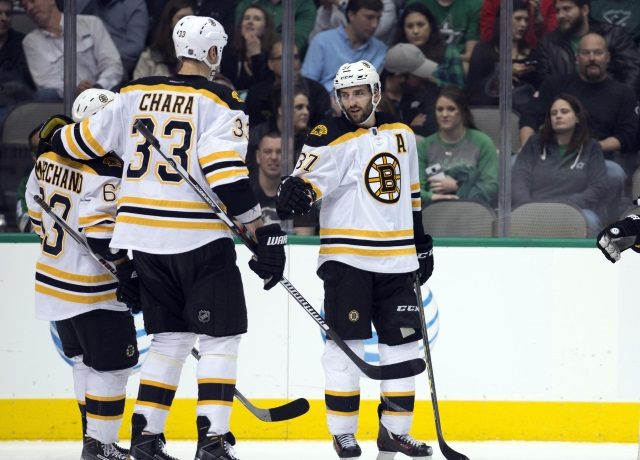 Defenseman Kevan Miller has been cleared for contact but won’t return until next week.

Defenseman Zdeno Chara hasn’t been cleared for contact. He wore a ‘contact’ jersey at practice yesterday as they didn’t have a ‘no-contact’ jersey that was big enough for him.

Boston Bruins: Chara on his return to practice: “Definitely want to play. That’s what we are here for. Want to make sure it’s in a good position and strong enough to be battling again.”

Kruger to the IR

Mark Lazerus: The Chicago Blackhawks put forward Marcus Kruger on the IR with a concussion and recalled Luke Johnson.

Zadorov leaves with a lower-body injury

Howard could be available today

Martinez not close to returning

Dennis Bernstein: Los Angeles Kings defenseman Alec Martinez remains on the IR and is not close to returning.

No timeline for Subban and Arvidsson

Brooks Bratten: There is no timelines for defenseman P.K. Subban or Viktor Arvidsson. Predators coach Peter Laviolette said it’s obviously a positive that they are both back on the ice.

Brooks Bratten: Arvidsson is still a couple weeks away from returning.

Juolevi is done for the year

Winnipeg Jets @ Los Angeles Kings, Game 35 Running Diary: Winning is Fun!
Kings love their undrafted rookie Matt Luff and all the affectionate nicknames they can give him