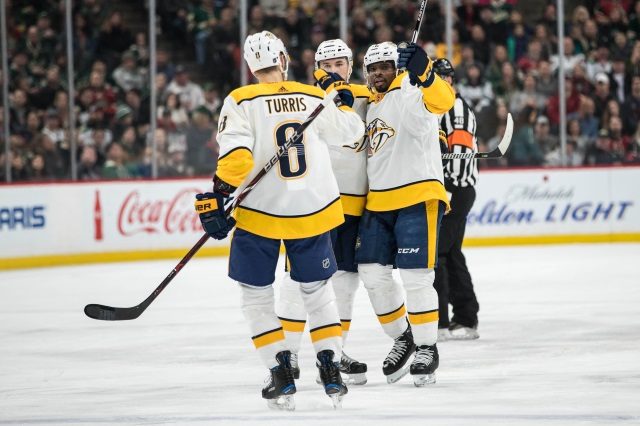 Joe Yerdon: If all goes well for Buffalo Sabres defenseman Marco Scandella he could return this weekend.

Ferland’s status and de Haan will be fine

Darren Dreger: The Hurricanes pulled Micheal Ferland from Tuesday nights game in the first period as he didn’t feel right. It was his first game back from his concussion.

Michael Smith: Hurricanes defenseman Calvin de Haan took six stitches about his right eye and his left eye is pretty swollen. Coach Brind’Amour: “His eye looked pretty bad this morning. He looked a little bit like Rocky. We just decided to give him a little breather. I think he’ll be fine.”

No update on Anderson

Klefbom to the IR, Caggiula activated

Edmonton Oilers: Defenseman Oscar Klefbom was put on the IR and forward Drake Caggiula was activated.

Martinez to the IR, Phaneuf back to LA and Doughty remains

Lisa Dillman: Defenseman Dion Phaneuf is back in LA for further evaluation. Looking like he’ll be out longer than just day-to-day. Defenseman Drew Doughty remains with the team and is day-to-day.

Turris and Subban could return next week

Chabot okay and Ryan could return

Murray Pam: The Ottawa Senators have assigned forward Paul Carey to the AHL, so it looks like forward Bobby Ryan could return to the lineup.

Bruce Garrioch: Senators defenseman Thomas Chabot is okay after blocking a shot in practice. He’s expected to play. Ryan could also be re-joining the team.

Jonathan Bombulie: Pittsburgh Penguins goaltender Matt Murray has been activated from the IR and was backing up last night.

Shattenkirk out with shoulder injury … Rangers could get three back

Jon Lane: The New York Rangers will be without defenseman Kevin Shattenkirk for two to four weeks with a separated shoulder.

Here’s where Kevin Shattenkirk sustained a shoulder injury after a hit from J.T. Miller against the Lightning on Monday. pic.twitter.com/s5DPHeBcPy

Jon Lane of NHL.com: The Rangers are hopeful that forward Mats Zuccarello (groin) and Pavel Buchnevich (broken thumb), and defenseman Adam McQuaid (lower-body) could return to the lineup on Friday.

Forward Cody McLeod remains out with a fractured hand.

Wilson not sure about tomorrow

Isabelle Khurshudyan: Washington Capitals forward Tom Wilson will wait and see how he feels tomorrow if he’ll be able to return to the lineup or not.