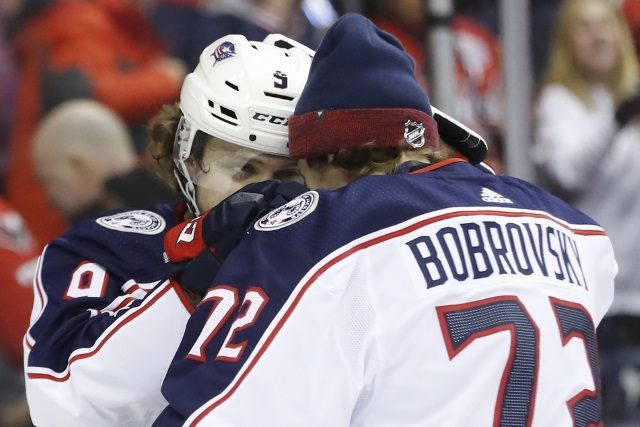 A trade and re-signing would ideal for the Canucks

Luke Fox of Sportsnet: In an ideal world Vancouver Canucks defenseman Alex Edler would waive his no-trade clause to allow the Canucks to deal him for some assets before the trade deadline and then re-sign with them on July 1st.

Nick Kypreos said a three-year, $17 million deal might be enough to get him re-signed.

Round up on the Blue Jackets, Flyers, Senators, Hurricanes, Kings, Panthers, and the Blues

Bruce Garrioch of the Ottawa Sun: After Sergei Bobrovsky‘s latest incident you have to wonder if the pending free agent will be traded by the deadline. On executive on the situation.

“The problem with trading him is he’s your No. 1 goalie,” a league executive told Postmedia on Friday. “You need him if you’re going to go anywhere in the playoffs. It would be hard to win that trade.”

There may not be big market for him though. Would the Philadelphia Flyers be willing to do a sign-and-trade?

The Carolina Hurricanes are getting interest in Micheal Ferland, Dougie Hamilton, Justin Faulk and Brett Pesce.

Rumor out there that both Artemi Panarin and Bobrovsky will end up in Florida.

St. Louis Blues GM Doug Armstrong could be on the hot seat. He’ll be looking to make some moves before the deadline.