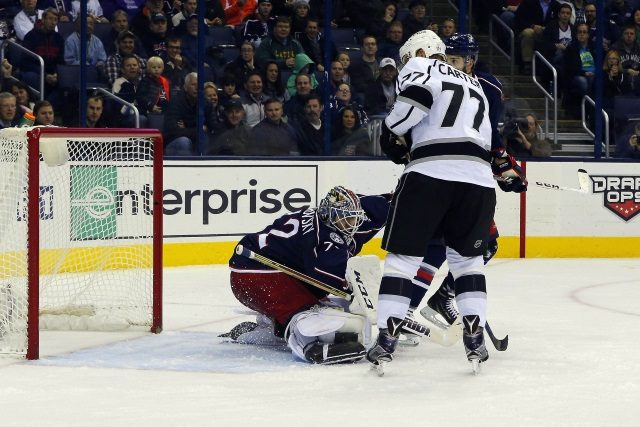 Scouting the Canucks and Flyers on Saturday

Russian Prospects: Detroit Red Wings GM Ken Holland and Columbus Blue Jackets GM Jarmo Kekalainen are amongst a large amount of NHL team scouts that are in Russia watching the Channel One Cup.

Elliotte Friedman: The Toronto Marlies (AHL) are expected to sign forward Tom Sestito to a PTO.

TSN Radio Vancouver: Pierre McGuire can see there being one or two offer sheets signed this offseason.

Aaron Portzline: (responding to reader saying that Kevin Weekes and Elliotte Friedman has used the term “untenable” in the past month with regards to the to the Blue Jackets and Sergei Bobrovsky‘s relationship) says that he believes that this is the agent talking and adds that Weekes and Bobrovsky share the same agent – Paul Theofanous.

It’s safe to say that the Blue Jackets relationship is better with Bobrovsky than it is with Theofanous.

Kings and Blues among the teams leading trade talk

Chris Nichols of Nichols on Hockey: Bob McKenzie was on TSN 690 and said that GMs are telling him there is more trade talk going on leading up to the holiday roster freeze than there has been in the past. The Los Angeles Kings, St. Louis Blues, Chicago Blackhawks and the Philadelphia Flyers are just some of the teams that are driving the trade talk.

The Kings are basically saying anyone other than Drew Doughty and Anze Kopitar could be available – Jake Muzzin, Jeff Carter or Tyler Toffoli. is sure teams will still ask about Doughty anyways whose no-trade doesn’t kick in until July.

The Blues are also in a position they didn’t expect to be in.

“And yet here he is, and so somebody says, ‘I want to talk to you about Tarasenko.’ He says, ‘Well, let’s talk.’ And Alex Pietrangelo, take your pick.

“These guys are all ears because they can’t afford not to be.”