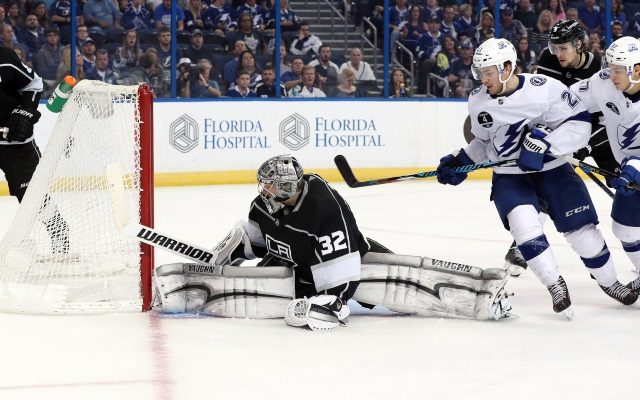 Could the Kings trade Quick?

Lisa Dillman of The Athletic: Los Angeles Kings goaltender Jonathan Quick returned to the lineup over the weekend.

The Kings best chance to turn their season around is with Quick in net. They were nine points out of the wild card and 10 points out of third place in the Pacific – heading into last night.

If the Kings are still out of at the trade deadline, could they consider moving Quick? If he plays well, his trade value could be good.

There was Kovalchuk – Bruins speculation before his injury

Matt Kalman of WEEI: There had been some speculation that the Boston Bruins re-visit interest in Kings winger Ilya Kovalchuk. Kovalchuk had been struggling and is now out for four weeks with ankle issue.

The Bruins do have the salary cap space, but he does have two more years on his deal, and it may not make sense for them given the new contracts that some of their young players will require.

David Pagnotta: Have been told that the Dallas Stars have been looking for a defenseman. Montreal Canadiens defenseman Karl Alzner is one defenseman they’ve looked. The Stars showed some interest in him when he was a free agent in 2017. They are looking at their options.

David Pagnotta: The Stars have also been linked to Canadiens defenseman David Schlemko. Stars assistant GM Jeff Jackson and one of their pro scouts was at the Canadiens-Sharks game over the weekend. Sean Shapiro: The Stars do play the Sharks on Friday.

Sean Shapiro: Not sure why the Stars would be looking to add a defenseman, and from what knows, they are not looking for one. The play of Taylor Fedun and Joel Hanley have given them time until the end of the month. They don’t need to move assets in a trade.