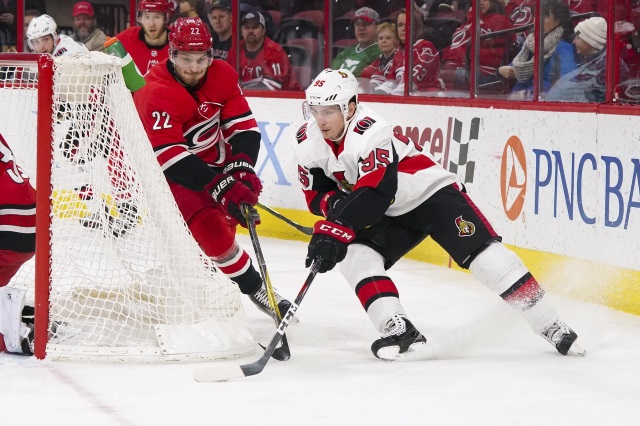 Senators and Duchene’s camp will continue to talk

TSN: Darren Dreger said that the Ottawa Senators have met with Matt Duchene‘s agent Pat Brisson and they’ve talked about the “general parameters in term and the finances.” The sides will continue to talk.

“The expectation is that Brisson and Dorion will reconnect next week. Now there’s not going to be a conclusion next week, it’s just another step in the process. Some point in the near future there’s going to have to be a decision – stay or go? They’re not there yet, but ultimately that is on Matt Duchene and that answer needs to come well in advance of the Feb. 25 trade deadline.”

Show me the money

TSN: Bob McKenzie said that Senators and Mark Stone‘s reps held preliminary talks earlier this week and are basically at the point of:

“Show me the money and decide whether or not you want to stay is basically where it’s at.”

“…  yet there are teams out there that have been calling Ottawa to see if there’s any interest in moving him, that’s also a decision-making process that the Senators are going to have to go through between now and the deadline.”

Right-handed defensemen available for a forward

TSN: Bob McKenzie said the Hurricanes continue to look for help up front.

“Now Dougie Hamilton‘s name is out there a lot, but the reality is whether it’s Brett Pesce or Justin Faulk, any right hand shooting defenceman who’s not named Jaccob Slavin is available for the right price if the Carolina Hurricanes can pick up an offensive forward.”

The Kings have term working in their favor

Dennis Bernstein: Could see the Los Angeles Kings trading forward Jeff Carter before the trade deadline. Would a contending team like the Nashville Predators be interested?

One thing that the Kings have working in their favor is that players like Jonathan Quick, Alec Martinez, Jake Muzzin, Carter and Tyler Toffoli all have term left on their deals and if they don’t get an offer that they deem fair, GM Rob Blake can hold on to them.

Which Actors Would Play the LA Kings in a Movie?
Toronto Maple Leafs, Buffalo Sabres, LA Kings and Philadelphia Flyers