NHL Rumors: The Muzzin Trade Could Be The First Of Many For The Los Angeles Kings 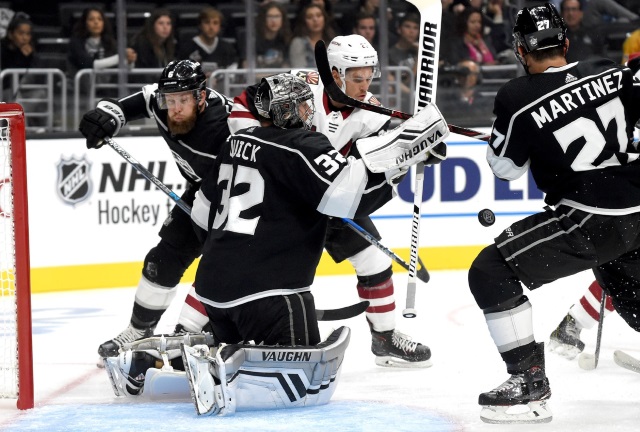 Dennis Bernstein: Kings GM Rob Blake made it clear that this is just the beginning for them. He is active on the trade market but not sure when their next deals will be.

John Hoven: The LA Kings plan should be a top five pick this year and next, and then a return to the playoffs in 2020-21.

Don’t expect the Kings to be big players in the free agent market this offseason. Adding any veterans would be a one- or two-year bridge.

Dennis Bernstein: Blake on the Muzzin trade: “We’re at the bottom of the league. We made this deal for the future of team. The 1st round pick was key. We’re looking at a lot of different options, there are active calls around the league.”

John Hoven: Can expect that defenseman Alec Martinez will be traded at the trade deadline or at the draft. The return will likely be a second-round pick and either a third-round pick or a prospect.

Dennis Bernstein: Don’t believe the Kings have any interest in moving Dustin Brown.

Don’t believe that the return they got for Muzzin will have a large impact on the Martinez’s trade value.

David Pagnotta: Other Kings that could be on the move include Jeff Carter, Alec Martinez, Trevor Lewis, Tyler Toffoli, Jonathan Quick, and Ilya Kovalchuk.

Martinez could remain with the Kings after dealing Muzzin.

Toffoli, Quick and Kovalchuk may not be moved before the deadline.

“We’re in a position where we’re looking up every day at the standings,” Blake said. “We’re not happy about where we are. We’re not comfortable where we are, and now we have to make decisions for the best of the organization going forward.”

How many struggling goalies do the Los Angeles Kings lose to?
LA Kings ‘State of the Franchise’ Set for Thursday at Novo in Downtown LA