It took more than 40 minutes Tuesday night for the Buffalo Sabres to finally rediscover what they lost since their winning streak ended.

Jack Eichel and Johan Larsson scored in the third period to erase a two-goal deficit, and Jeff Skinner’s game-winning goal 1:49 into overtime gave the Sabres a 4-3 win over the Los Angeles Kings in KeyBank Center. The Sabres, 18-8-4, snapped a five-game winless streak and won their first game since Nov. 27.

It was the sixth time this season they won despite trailing after two periods, surpassing their total from last season. Eichel and Larsson scored less than four minutes apart to tie the score, and Skinner scored on the power play after the Kings took back-to-back penalties near the end of regulation. Linus Ullmark, making his third consecutive start, stopped 26 of 29 shots.

Jake Muzzin, Matt Luff and Adrian Kempe scored for the Kings, who began the day 30th out of 31 teams with 23 points and wasž playing the second night of back-to-back games on their schedule. They were down to four defensemen in the third period because of injuries and had backup goalie Calvin Petersen in net.

The Sabres were outplayed for much of the second period and allowed two unanswered goals, including Kempe’s wrist shot from the slot at the 12:55 mark. However, Buffalo finished with a 46-29 advantage in shots and controlled play after the second period. Zemgus Girgensons scored in the first period to tie the game 1-1.

Mike Harrington: Sabres make another great comeback but still have to deal with reality

Opening salvo: Muzzin scored 6:11 into the first period for a 1-0 lead. While Anže Kopitar battled with the Sabres for a loose puck on the right side of the net, Ullmark dropped down to the ice to protect the post. Kopitar collected the puck and passed to Muzzin, who beat Ullmark with a high shot.

Sabres’ answer: Winger Patrik Berglund was unavailable because of an illness, which thrust Girgensons back into the lineup. Girgensons took advantage when he stripped Kings defenseman Drew Doughty of the puck and snapped a shot past Petersen to tie the score 13:26 into the first.

Secondary scoring: Girgensons’ goal was the first time in five games a player other than Eichel, Jeff Skinner or Sam Reinhart scored for the Sabres.

Busy first: Both teams kept the officials busy in the first period as five penalties were called, including two by the Sabres. Though Buffalo was 0-for-3 on the power play in the first period, its first opportunity lasted only 27 seconds because Reinhart was called for high-sticking.

4:02: The Sabres took back-to-back penalties in the second period that overlapped by two seconds, an interference minor against Kyle Okposo and a cross-checking penalty against Nathan Beaulieu. 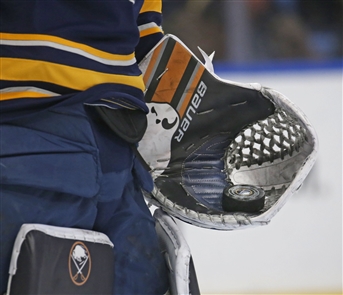 1-for-19: Buffalo entered the game 1 for its last 14 on the power play and went 0 for 5 through the first two periods before Eichel scored 3:47 into the third period.

Goalie Carter Hutton was available as Ullmark’s backup and could start Thursday against the Arizona Coyotes. Doughty left the game late in the first period with an upper-body injury and did not return. Los Angeles defenseman Dion Phaneuf did not return for the third period.

Perspective: This is the Sabres’ 12th-best record through 30 games in franchise history and their best since 2008-09 (19-9-2). They made the playoffs in each of the previous 15 seasons in which they had 33 or more points through 30 games.

Next: The Sabres will return to practice Wednesday morning in KeyBank Center. They host the Coyotes Thursday night at 7 p.m.