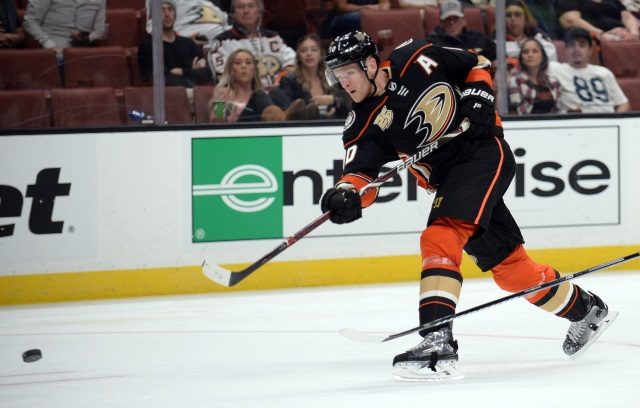 Perry getting close to skating

Elliott Teaford of the OC Register: Anaheim Ducks forward Corey Perry had surgery back on September 26 to repair his right knee.

Perry is still weeks away but he’s getting closer to resuming skating.

Forward Patrick Eaves (rib) and goaltender Ryan Miller (sprained knee) remain out as well. Eaves is practicing and could go on their road trip.

Connauton still out with a lower-body injury

Ian MacAlpine: Kings prospects Gabriel Vilardi will be shut down for the remainder of the OHL season according to Kingston Fontinacs GM Darren Keily. He could end up with the Ontario Reign of the AHL once the OHL season is over.

Curtis Zupke: Kings GM Rob Blake would only say there is no timetable for Vilardi’s return.

Fehr out for at least a week

Sarah McLellan: Minnesota Wild forward Eric Fehr will be out for one to two weeks.

Dunn out with a lower-body injury

Mike McIntyre: Jets Ben Chiarot on injured defenseman Tyler Myers: “Just talked to him and he said he got caught up in the boards. I didn’t see exactly what happened. He’s a tall guy, so when guys get in around his legs, funny things happen. Hopefully, he’s okay.”